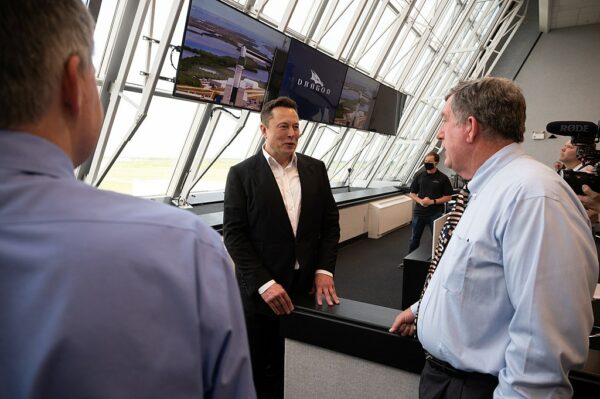 Elon Musk, SpaceX Chief Engineer, speaks with NASA International Space Station Program Manger Kirk Shireman, after the launch of a SpaceX Falcon 9 rocket carrying the company's Crew Dragon spacecraft on the Demo-2 mission with NASA astronauts Douglas Hurley and Robert Behnken onboard, Saturday, May 30, 2020, in firing room four of the Launch Control Center at NASA’s Kennedy Space Center in Florida. NASA’s SpaceX Demo-2 mission is the first launch with astronauts of the SpaceX Crew Dragon spacecraft and Falcon 9 rocket to the International Space Station as part of the agency’s Commercial Crew Program. The test flight serves as an end-to-end demonstration of SpaceX’s crew transportation system. Behnken and Hurley launched at 3:22 p.m. EDT on Saturday, May 30, from Launch Complex 39A at the Kennedy Space Center. A new era of human spaceflight is set to begin as American astronauts once again launch on an American rocket from American soil to low-Earth orbit for the first time since the conclusion of the Space Shuttle Program in 2011. Photo Credit: (NASA/Joel Kowsky)
PoliticsUS News

Elon Musk was a self described Democrat stating he “overwhelmingly” voted for them in the past.

That has now changed.

Musk has now announced that he will vote for more Republicans after never having voted for them before.

“The reality is that Twitter at this point, you know, has a very far left bias,” the Tesla CEO — who was born in South Africa but is a US citizen — said. “I would classify myself as a moderate, neither Republican nor Democrat.”

He continued: “And in fact, I have voted overwhelmingly for Democrats, historically. Overwhelmingly. Like I’m not sure, I might never have voted for a Republican, just to be clear. Now this election, I will.”

Elsewhere in the conversation, Musk told the panel that he was eager to buy Twitter because he wanted to bring more “balance” to the platform.

“I think there’s a need for a public town square where people can debate issues of all kinds,” he said, adding: “where it feels balanced from a political standpoint [and] it’s not biased one way or the other.”

Musk’s purchase of Twitter is currently on hold as he looks into how many fake accounts exist on the platform.

[READ NEXT: Trump Left Off the Hook]