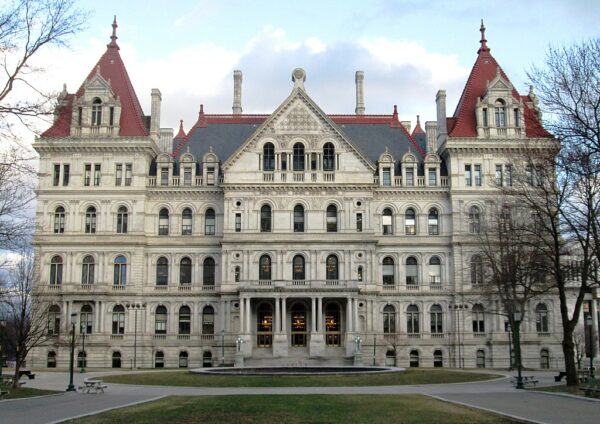 The New York State Capitol, the seat of New York State government, is located between State, Washington, South Swann, and Eagle Streets in Albany, New York. Housing the New York State Legislature, the building was built from 1867 to 1899 in the Romanesque Revival and Neo-Renaissance styles and was designed by Thomas Fuller, Leopold Eidlitz, Henry Hobson Richardson and Isaac G. Perry. The building was listed on the National Register of Historic Places in 1971, then included as a contributing property when the Lafayette Park Historic District was listed in 1978. It was declared a National Historic Landmark in 1979 [Photo Cred: Beyond My Ken, CC BY-SA 4.0, via Wikimedia Commons
Uncategorized

“I hereby submit my resignation effective May 25, 2022 at 4 p.m. EST as United States Representative of the 19th District of the State of New York,” the House clerk said, reading a letter Delgado sent to Speaker Nancy Pelosi (D-Calif.).

Delgado is departing the lower chamber to assume the No. 2 role in the Empire State after former New York Lt. Gov. Brian Benjamin (D) resigned from the post in April.

Benjamin was arrested in April and charged with federal program bribery, honest services wire fraud, conspiracy to commit those offenses and falsification of records. He is accused of trying to direct a state-funded grant worth $50,000 to an organization in exchange for campaign contributions.

New York Gov. Kathy Hochul (D-N.Y.) earlier this month tapped Delgado to be her new lieutenant governor, and on Monday she said he would be sworn in on Wednesday.

A special election will be held to fill Delgado’s vacated seat in the House of Representative on August 23rd.

[READ NEXT: Republicans Get a New Voter]