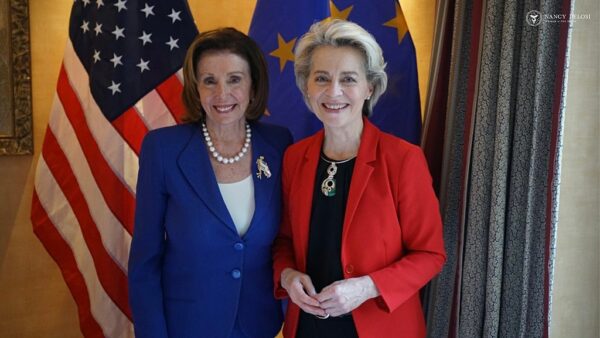 Today, our Congressional delegation was honored to meet with the President of the European Commission @vonderleyen. [Photo Credit: Office of U.S. House Speaker, Public domain, via Wikimedia Commons]
Politics

Speak of the House Nancy Pelosi has tested positive for Covid-19 as cases in Congress rise.

“The Speaker will quarantine consistent with CDC guidance, and encourages everyone to get vaccinated, boosted and test regularly,” he added in a second post.

Pelosi’s positive test result comes the same week that the speaker attended several events with President Biden, standing directly next to him as he signed an executive order related to the Affordable Care Act on Tuesday — as well as during the signing of a postal reform bill on Wednesday.

Pelosi’s positive test was the latest in a string of COVID-19 cases involving at least 14 lawmakers, journalists, administration officials and White House staff who attended Saturday’s Gridiron Club dinner in the nation’s capital.

Pelosi was scheduled to lead a congressional delegation to Asia but that trip has been postponed.